The Making of Feliki by Terri Miller 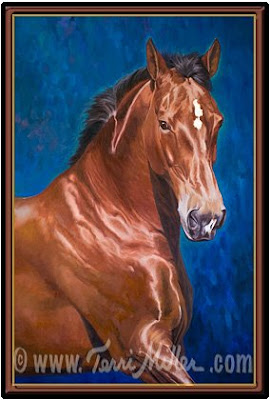 This Painting of the Week was actually more than two years in the making: It is the 48"x72" oil painting of Feliki, Tami Hoag's Grand Prix "grande dame." Feliki has a larger than life personality, so it's only fitting that her painting be practically larger than life, too. Feliki was a blast to photograph. While I painted, her canvas was a huge presence in my studio physically, and her aura was a huge presence energetically. I'm told that even though she's retired, Feliki is still the queen of the barn, and after spending so much time in the company of her images, I not only believe that, I wouldn't expect it to be any other way!

You can read the complete story about The Making of Feliki on Terri's blog.
Posted by Ristyz at 2:33 PM No comments: