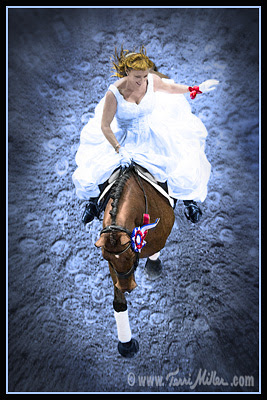 Harbor Springs, MI—World-renowned equine photographer Terri Miller was chosen as the winner of the third Offield Farms Shoot to Win Photo Contest held at the Rolex FEI World Cup Dressage Finals. Miller’s winning photo, titled “Dressage Dream”, of Elizabeth Ball on Iris Eckstein’s Orion, was selected from dozens of photos submitted. The panel of judges was charged with the task of identifying an image that best captured the excitement of dressage and Miller’s photo was determined to best meet the criteria of the contest.

“Our third photo contest was difficult to judge,” explained Karin Reid Offield, who created and has sponsored the World Cup Dressage Finals Shoot to Win Photo Contest for the past three World Cup Finals held in the United States. “It was important that the winning photo showcase the excitement and energy of our sport. I had hoped that I would find a photograph that captured the audience’s moment of excitement during Steffen’s wonderful rides, as the creative banners and American flags showed the spectators’ enthusiasm. However, when I saw Terri’s photo I thought, ‘Wow, now there is a shot!’”

For Offield, Miller’s photo, “had an advantage of being taken in a spot where no one else had ever been. That’s really the goal of the contest—showcasing images that break free from the norm and deliver the excitement of dressage. We wanted an image that makes people stop and stare. Terri’s photograph does that for me and it’s worthy of a magazine cover. Congratulations to Terri and all of the photographers that entered our contest.”

Terri Miller, of Lake San Marcos, California, commented, “ I am thrilled to have won the Offield Farms World Cup photo contest, especially with this particular photo.” “Dressage Dream” was taken during the pas de deux competition held during the World Cup Finals. Ball and Orion were paired with Olympic medalist Guenter Seidel on Marie Meyer’s Fandango. The duo rode a costumed Phantom of the Opera piece that brought the house down.

“I have always loved the vantage point of being up high, whether in a tree, helicopter, or in this instance, in my ‘secret aerie’ at the Thomas & Mack Arena,” Miller explained. “This was the very last shot that I got of Beth and Orion as they rode out of the arena with their ribbons. I just loved the gestural feeling of the moment, from Orion’s pointed ears and softly reaching leg, to Beth’s rustling dress, flying hair and the sweep of her arm with her rose corsage. I chose to treat this image as an art piece, rather than a straight photograph because the entire performance felt dreamy and surreal. Hence my choice of the blue tones and the edges that fade to a soft-focus black.”

For her efforts Miller received $500 in prize money, along with a matching $500 donation to the equine charity of her choosing, the Monterey Horse Park in California. She explained her choice, “ I chose the Monterey Horse Park because in general we’re losing so much land to development, and as riders we’re losing access to so much recreational land. This is a great chance to not only save a little piece [of land] for equine use, but also to create a world class show facility as well.”

This is Miller’s second Shoot to Win victory; she claimed the inaugural prize in 2005. Her photos and painting have graced the covers of dozens of magazines, calendars and catalogs. Her work is frequently juried into museums, galleries and exhibitions, including the 2009 American Academy of Equine Art show at the Museum of the Horse. A graduate of New York’s acclaimed School of Visual Arts, Miller sees through the lens with the eyes of a painter. As a student of equine movement, Miller has a keen eye for finding the very best moments of energy, harmony and brilliance.

“Terri’s photo is amazing, but a visit to our website shows that the judges had their work cut out for them in choosing the winning entry,” Offield stated. “I want to thank all the photographers that took the time to enter this year. It is appreciated and fun. “ To view the winning photograph and a gallery of many other entries, visit www.OffieldFarms.com. To learn more about Miller’s equine charity of choice, log on to www.montereyhorsepark.org.

Offield Farms’ mission is to serve as a significant catalyst for the advancement and promotion of the sport of dressage through special events, educational programs, corporate entertainment, media projects and through personal interaction between horse lovers and horses. Visit www.offieldfarms.com now combined with www.lingh.nl for more information about dressage, Lingh and the passion for our sport.

Posted by Ristyz at 2:11 AM No comments: