Several readers have asked questions about the painting “Spanish Quadrille” which I used on my Christmas card.

The inspiration came during a trip to Spain in the 1980’s. I was doing some photography work for the Spanish Tourism Bureau, and the assignment on this trip was the Feria Del Caballo in Jerez de la Frontera. (Jerez was the site of the World Equestrian Games in 2002.) This feria is all about Spanish horses, Spanish wine and Spanish dancing…. Talk about a peach of an assignment, huh? Did I mention that most of the Spanish horses were ridden by handsome Spanish men? During the day there was a big, multi-faceted horse show going on, with classes for breed horses and carriage classes for everything up to a six-horse hitch. (Continued Here) 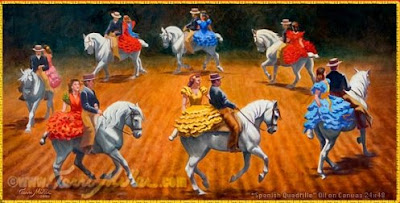