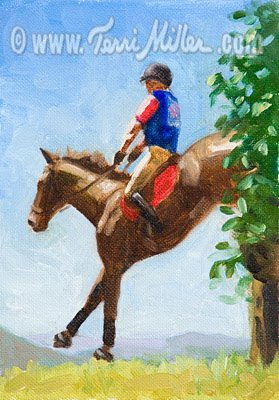 Back in the ’80’s and ’90’s, I photographed just about every top three day event on the east coast: Radnor and Fair Hill, Chesterland and Essex, Groton House and Millbrook. I split my time evenly between eventing and dressage. But over the past decade since I moved to San Diego, aside from the occasional foray to Rolex in Lexington, KY, I’ve pretty much concentrated on dressage.

Well, it sure was fun to go up to Galway Downs and see horses run and jump cross country again! It was a bright sunny day in Temecula, about 70 degrees, just perfect conditions for galloping over big fences. I wandered out to the two water jumps, because I’m working on a series of paintings for which I needed fresh photo reference. I brought a new camera body that I was test-driving, and my watercolors. Continue Reading and see more paintings!

The Vision 18 members have not been resting this winter. They have been traveling about the country creating some great new works. Look for new paintings from Terri Miller, new photographic art from Mary Cornelius and Marie Cobb, all from the Palm Beach Dressage Derby.

April Visel has been shooting her heart out in Scottsdale AZ at the world famous Arabian show...etc. so forth..

Nancy McCallum has donated a few of her exquisite photos to C.A.N.T.E.R. for one of their fundraiser projects. C.A.N.T.E.R. is a non-profit organization that works to find new homes for Thoroughbred ex-race horses. More information about C.A.N.T.E.R. can be found at www.canterusa. org.

Melanie Snowhite's images were chosen for Intervet's 2009 "We're For the Horse" ad campaign representing such products as ReguMate, Banamine, FluAvert, FoalCare, PreveNile and EquiRab. This is the second year Intervet has used Melanie's images.
Posted by Ristyz at 10:22 PM No comments:

From Fingernails to Backgammon 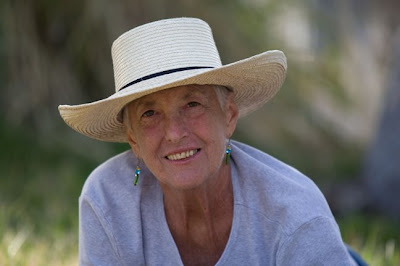 I got to thinking about my grade school teachers today while I was filing my nails. The connection is logical: Mrs. Johnson (4th grade) had the most beautiful hands and nails, and I craved having fingernails just like hers: long and pointy. My nails were short and stubby, breaking off easily and tearing from too much mucking out. I was nine and played with horses a lot, so of course, the nails were usually ragged and dirty.

Nowadays, my nails are long, but the basic shape is kind of wide, so it's not a graceful look like Mrs. Johnson's nails had. So here's my point: when we're kids, we don't always see the whole picture. No matter how long my nails might get, I'm never going to have glamorous hands, but at the time, I didn't know enough to get that.

Mr. Wingate (7th grade) had been in the war (meaning WW II). He told us one day about receiving a transfusion in the field of battle. Did we know what a transfusion was? It meant, he explained, that blood was put into his body from a bottle. This was very suspect and unlikely, but he also described the feeling of the blood rushing in and filling his veins and was like nothing else he'd ever experienced. He felt himself coming back to life. The class was mesmerized with this concept and sat silently, absorbing it all.

Mrs. McGaughy (1st grade, 1944) told us about a dream she'd had. Her son, a pilot in WWII, was calling to her. The dream woke her up, and within a day or two, she learned that his plane had crashed in the ocean.

I saw Miss Cole (6th grade) in the grocery store once. I didn't know how to act. I never thought about the fact that teachers are people, too, and have to eat--which implies that they have to shop, too. It was wierd seeing her out of place. Another example of how kids don't always see the big picture. She never liked me very much.

We got report cards four times a year, and Miss Cole always checked the box that said, "Lacks initiative." What is initiative, I asked my parents. It means readily leading the action. Well, my parents had always said in direct words, in so many words, and in their own actions, things that showed me how inadequate I was, thus leading me down the path to low self-esteem. Therefore, it would be oh-so natural for me not to show any initiative. At least, that's how I interpreted life with my parents back then, 1949.

I think her name was Miss Hall (2nd grade), not really sure, but she was beautiful. She was so beautiful, that I would have done anything for her. Second grade started out very well, as I was eager to please her, but in a few months, she disappeared and someone else took her place. No one ever explained where Miss Hall went, even though I asked, but my desire to be a good student went with her. That's when I started getting bad marks on my report cards. Disrupts the class. That sort of thing, and of course, shows no initiative.

Mr. Frey (8th grade 1953/4) stands out in my mind as a real person. Perhaps because I was finally a teen and finally getting the concept of actions-leading-to-consequences, and it's all our own fault. Mr.Frey told us about a girl in our class who'd gotten pregnant and would be gone from school. What a scandal, back then, especially at age 13. And especially because the class was so small to begin with. That made a difference to us, somehow.

Getting the whole picture in 4th grade led to actions-begetting-consequences in the 8th grade. Being a slow learner, it was somewhat later in life that that actions/consequences thing really hit home. A friend taught me how to play backgammon (1979), where every decision leads to every consequence, win or lose. It's not the roll of dice that matters, so much as what you decide to do with the numbers that come up. You have to scope out all the risks and possible outcomes before making a decision on your moves.